The famous Pollera Parade Las Tablas, Panama. Do not have plans for Saturday? Here is a good idea: Begins at 1 p.m. on Saturday, January 10 starting from the Government office building in Las Tablas, ending at Plaza Praga. 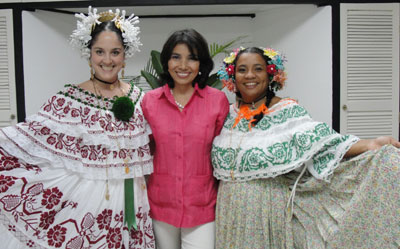 How many 1000s of women will be in Pollera traditional dress? Go and find out! One of our teachers will be in this parade as she loves Pollera dancing so so much!

What is a Pollera? A Pollera is a traditional large, usually hand-made, skirt, which is found throughout Latin America. Panama has a vibrant tradition of the Pollera, and the town of Las Tablas is famous for its Thousand Polleras Parade. This is a parade during the Carnival festivities in Las Tablas (there are many Pollera parades throughout Panama).

Las Tablas in the Los Santos Province is famous as a recognised national centre of Panamanian folk culture. This small town (pop: circa 8,945), about 4hrs from Panama City is a fantastic place to visit, and is particularly famous for its Carnival festivities.