Canadian Spanish school Director, Joseph Ennis, celebrates Canadian Thanksgiving in Panama City with Canadian Ambassador, Sylvia Cesaratto. Also with United Kingdom Ambasador, Dr Ian Collard (far left), and France Ambassador, Phillippe Casenave (far right). It was a great fit for a Canadian celebration in Panama as these are also the Ambassadors of Canada’s two founding nations. And Joseph Ennis is from Newfoundland, once colonized by both France and England, before becoming the last province to join Canada in 1949. 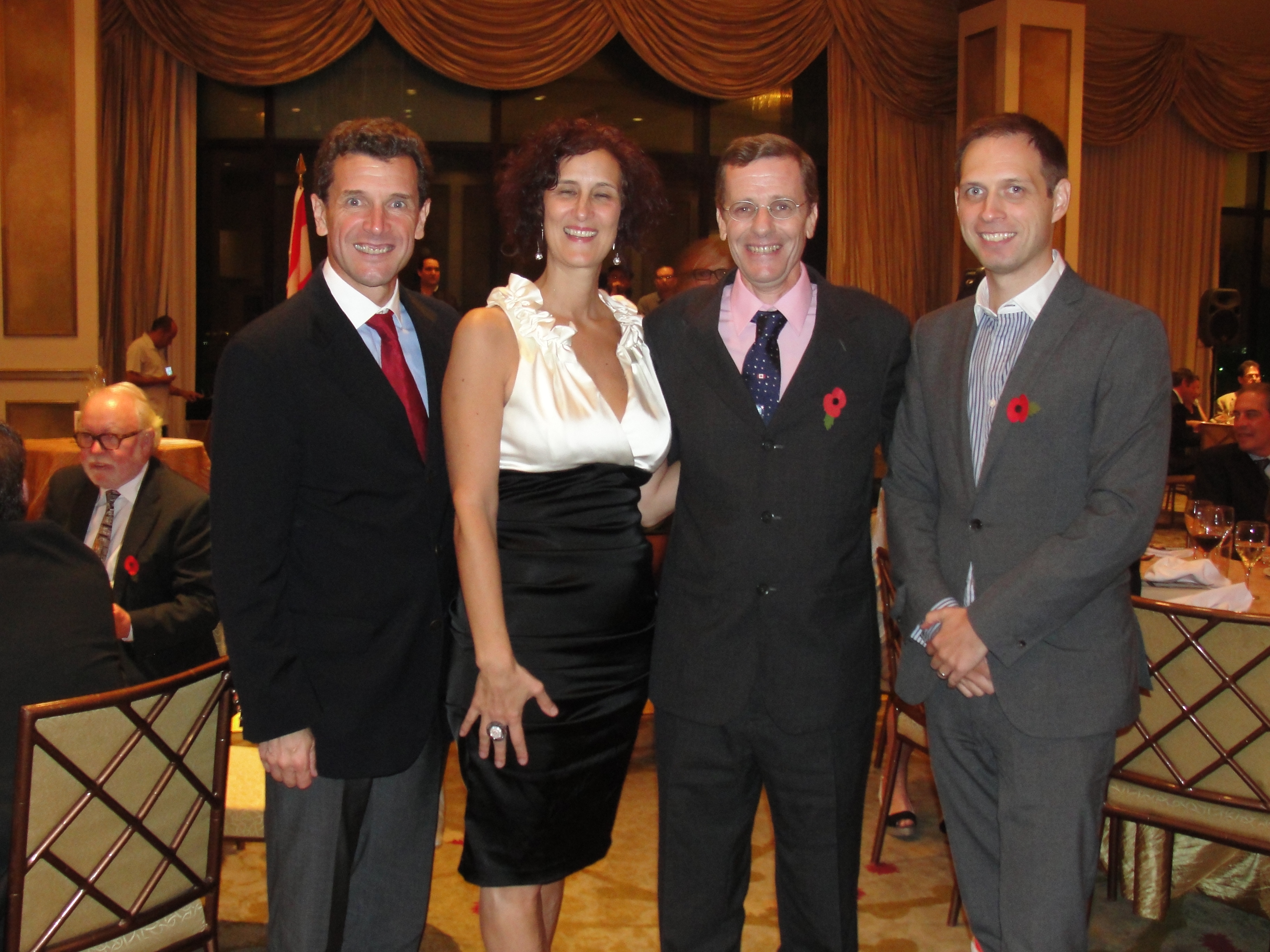 This first generation Canadian became Canada’s Ambassador to Panama in 2011. This was at a time when Panama’s economy was modernizing at a rapid pace, and Canada’s involvement in Panama was stronger than ever before, with a Free Trade Agreement coming just 2 years later.

Sylvia Cesaratto got her Bachelor’s degree in Business Administration at Concordia University (1987). She joined the Department of Foreign Affairs and International Trade in 1991. In 1993 she was posted in South Africa. In 1999 Ms. Cesaratto served Secretary for aerospace and defence in London, UK and in 2003 as the Commercial Counsellor in Brussels, Belgium.

Her husband is Malcolm Britto and they have 4 children.

I’ve had some good conversations with both Sylvia and her husband, Malcolm. And they were great fun at the events and Canadian functions we attended together. I gave Sylvia a copy of my Dad’s book on his life in Newfoundland “Adapting to a Changing Situation” : Joseph Ennis

Dr Ian Collard is married and has four daughters. He became Ambassador to Panama in Nov., of 2013. He also had a stint at the United Nations Security Council in New York as well as British Embassy in Washington DC. As Head of the NA Dept at the British foreign ministry he coordinated the UK’s governmental engagement with Canada and the US. In 2012, Ian Collard successfully led the FCO’s security and counter-terrorism activities during the Olympic and Paralymic Games.

He had also worked with Imperial Oil in Canada. He graduated with Bachelor’s and Master’s degrees, and a Doctorate, each in biological and anthropological sciences, from King’s College, Cambridge University.

A great evening was had by all of us at the Canadian Thanksgiving : Joseph Ennis

Phillippe Casenave was born May 3, 1965. He has a list of amazing medals for his service and speaks 5 languages.
He received a Diploma of the Institute of Political Studies in Toulouse (Master in Political Science)
We was a student of Longwood University (Master of Arts in Literature Inglés) – Farmville, Virginia, USA
He was an active officer in the Air Force, served at Ministry of Foreign Affairs of France (Protocol) in Paris.
In 2003-2006 he was the First Counsellor of the French Embassy in Peru, and later the Minister Counsellor of the Embassy of France in Pakistan as well as the Chancellor of the United Arab Emirates in Abu Dhabi.
2011-2014: Ministry of Foreign Affairs – Deputy State Ceremonial – Directorate General of Protocol -Paris