Spanish Panama Language School has partnerships with Panama upscale hotels and hostels in Panama City, Panama. This is indeed challenging as there are frequent changes in staffing, administration, and even ownership of hotels & apart-hotels in Panama.

Did you know that most of the best accommodations in Panama City are in El Cangrejo around Spanish Panama Language School? Spanish Panama also has its own small studio apartment near the school on Via Argentina but this must usually be booked far in advance. Ask about the apart-hotels close to the school as monthly prices and availability change depending on demand.

A Ramada hotel from the international hotel chain has a gym & swimming pool & is just a 15 second walk away. The Saba hotel and Grand International Hotel are also a few seconds walk away. All 3 of these hotels are on Via Argentina, same as the Spanish school, while Best Western and Principe are around the corner.

These hotels have been favorites of our Spanish students for their location to the school and total convenience of shopping, dining, nightlife, and excellent transportation access to the best things to do and the best things to see in Panama City!

Spanish Panama has partnered with this apart-hotel on Via Espana in Panama City’s center. It is a good place to stay in Panama, just a few blocks from the language school, and by the metro train station. Enroll in the 4 week Spanish program and study Spanish here after class.

For one of the best deals in Panama, enroll in a 4-week intensive Spanish program, and stay in this aparthotel for a month or more. This is a short walk from Panama’s language school.

Spanish Panama Language School also has a partnership with a hostel with single rooms or shared dorms for budget travelers or backpackers. This is only a 10 minute walk away.

A shared dorm is $300.00 including a light breakfast if you enroll and pay in advance for the economical 4 week intensive Spanish course at Spanish Panama.

We are located right on Via Argentina in the El Cangrejo neighborhood, near “Cabeza Einstein” – the Albert Einstein’s head statue. We are a half-block away from the neighborhood park, Andres Bello.

Find us on Google Maps from the link you see below and keep our address in mind as many students do when looking for the best places to stay in Panama City while studying Spanish with us. 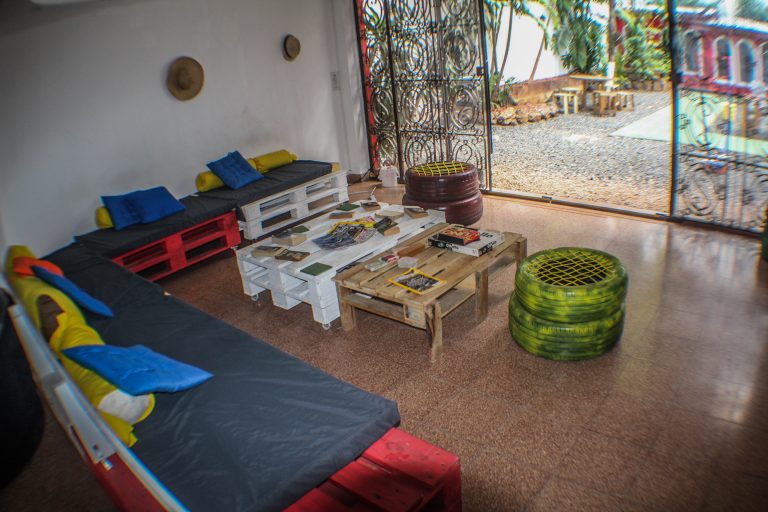 Grand International Hotel (1st photo) is just across the road from your Spanish classes at Spanish Panama Language School.

Principe Hotel (3rd photo-lobby) is a block away near the General Bank. 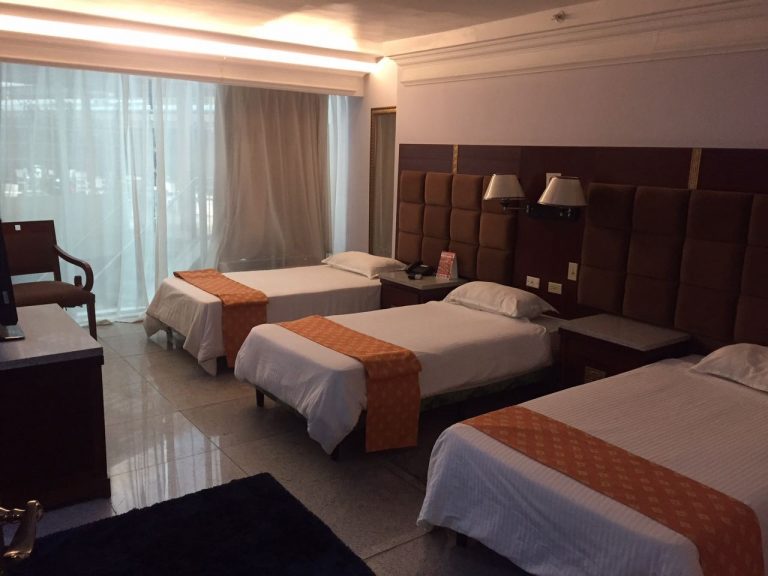 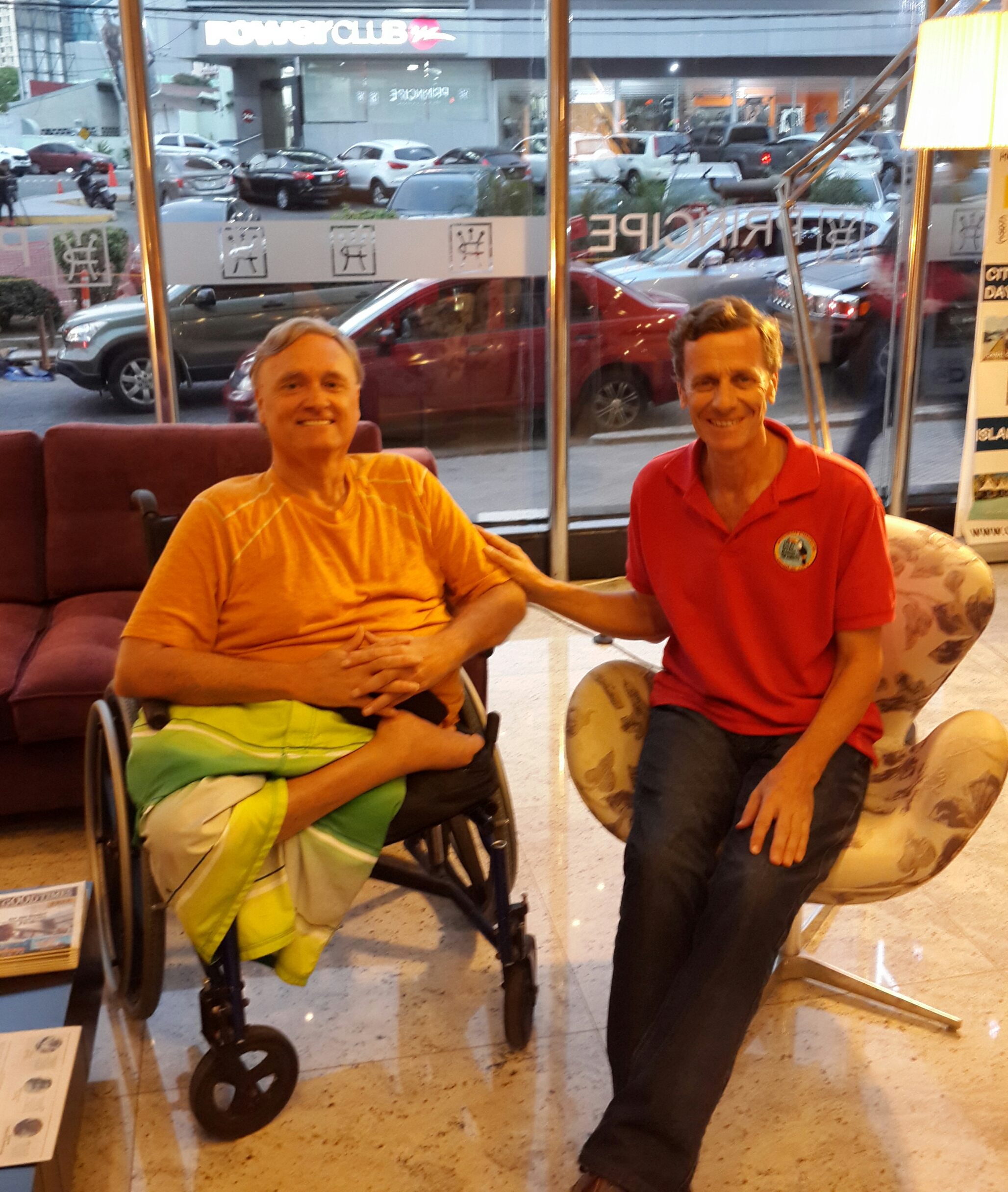 Amazing that Christian spoke 5 languages and our Spanish classes made it #6. After 4 months research, he recommends Principe Hotel & also our Via Argentina sidewalks as the best in Panama for his special needs. Across from Power Club Gym as you see in the window.

You may contact them yourself and for one to twelve weeks of studying Spanish lessons at Spanish Panama Language School we will find you the best available corporate rates for short-term or long-term stays because of the special relationship that the school has developed.

Only 4 doors to the left of Spanish Panama is Saba Hotel. This is quiet and with a terrace and view right on Via Argentina. A pleasant place for real serious Spanish students. Cost is about $490.00 a week and includes breakfast 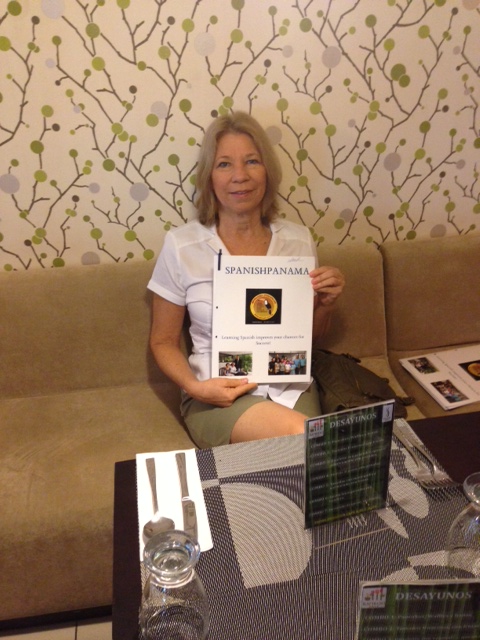 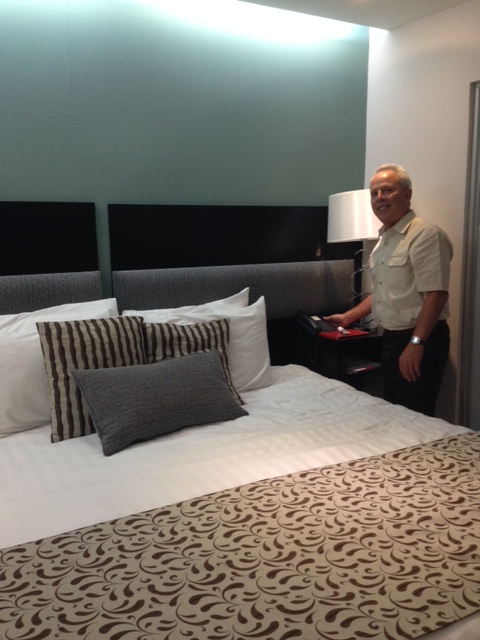 In order to learn Spanish in Panama City, Jackie and Donnie stayed at Saba Hotel, Via Argentina, as it is only 4 doors from Spanish Panama school:

“Overall, I was pleased (with Spanish Panama). I especially found Allan to be a very good teacher. I spent 20 hours in school and learned a lot and given enough time (which you don’t really have during a conversation) can get my brain to formulate most of the things I want to say.”

Hotel Marriot is worth a special mention for the big casino, live music, and having the best Arabic food restaurant just across the road. This Beirut Restaurant is a favorite of Spanish Panama’s language students.

Marriott is on the other side of Vía España but all of these Panama City hotels are a 10 minutes walking distance of Spanish Panama or less!

There is also another Marriot Hotel adjacent to Multiplaza, Panama’s most upscale mall.  There is also a Hard Rock Cafe Hotel joined to Multicentro shopping mall.

And there is a TRYP Hotel attached to Albrook Mall, now reachable via Metro train from Spanish Panama Language School’s Via Argentina Metro train stop. This takes only 12 minutes.

Each of these 3 hotels, Marriott, Hard Rock Cafe, & Tryp Hotel, has an attached shopping mall. All 3 are about a 10-15 minute car ride from Spanish Panama. Our Spanish teachers can give classes at any of these above hotels.

The famous Ramada Inn chain has a hotel with a gym and pool just beside Spanish Panama Language School. This costs about $65.00 a night, but can change due to demand and time of year. 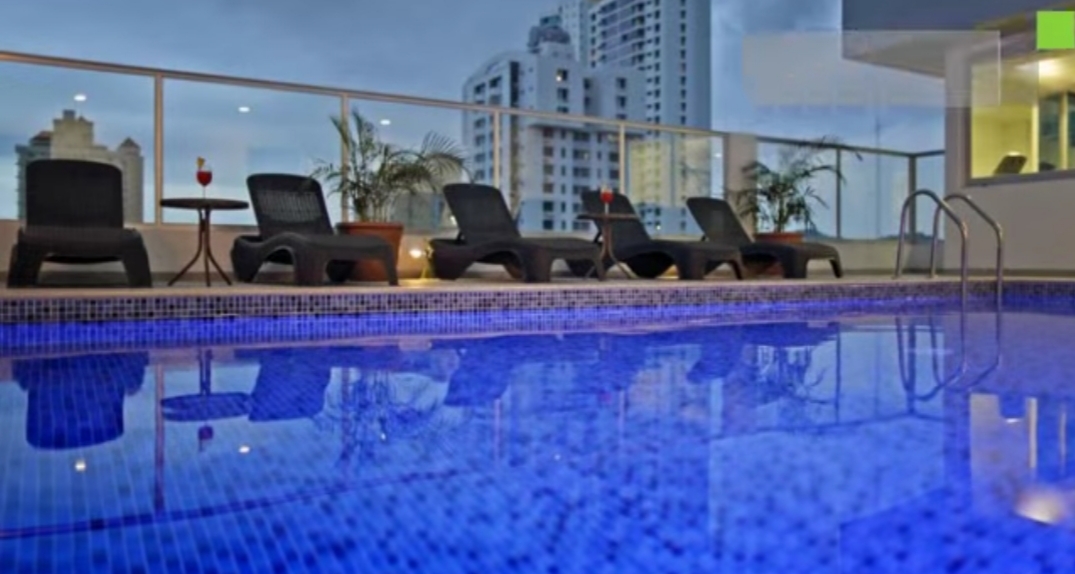 This swimming pool is 2 doors away from Spanish Panama Language School. Ramada Hotel, Via Argentina

For our most economical option, Spanish Panama budget accommodations are best for budget travelers, students and backpackers in Panama. Rates start at $88.00 a week (including breakfast) and that is in a shared dorm room. These dorm rooms are great as there is an outdoor patio cafe area, friendly service, and a very friendly atmosphere. These French owned accommodations also have single rooms (starting at $35/day) and are about a 15 minute walk from Spanish Panama Language School.This is a fun place to stay while taking Spanish classes.

Whenever our driver picks you up at the airport ask him to passby and show you Spanish Panama Language School before taking you to your homestay, hotel, B&B, or other accommodations. Spanish Panama is located right on the corner of the best intersection in Panama City (Cabeza Einstein), on the best street in Panama City (Via Argentina), and in the best neighborhod in Panama City (El Cangrejo) for convenience with just about everything you’ll need while in Panama. If you are anywhere central in Panama City you will most likely be a few minutes walk from Spanish Panama. Our driver will be happy to answer any questions you have about what’s around your new neighborhood.

Spanish Panama home stays usually fill up a few months in advance so reservations have to be made early; the cost starts at $300.00 per week and this  includes breakfast. This has the advantage of staying with Spanish speakers and practicing your Spanish conversational skills with native speakers. The more weeks you stay in home stay the more economical it is per week. One month homestay with breakfast is now $950.00 per month Please confirm with us for availabiliy. 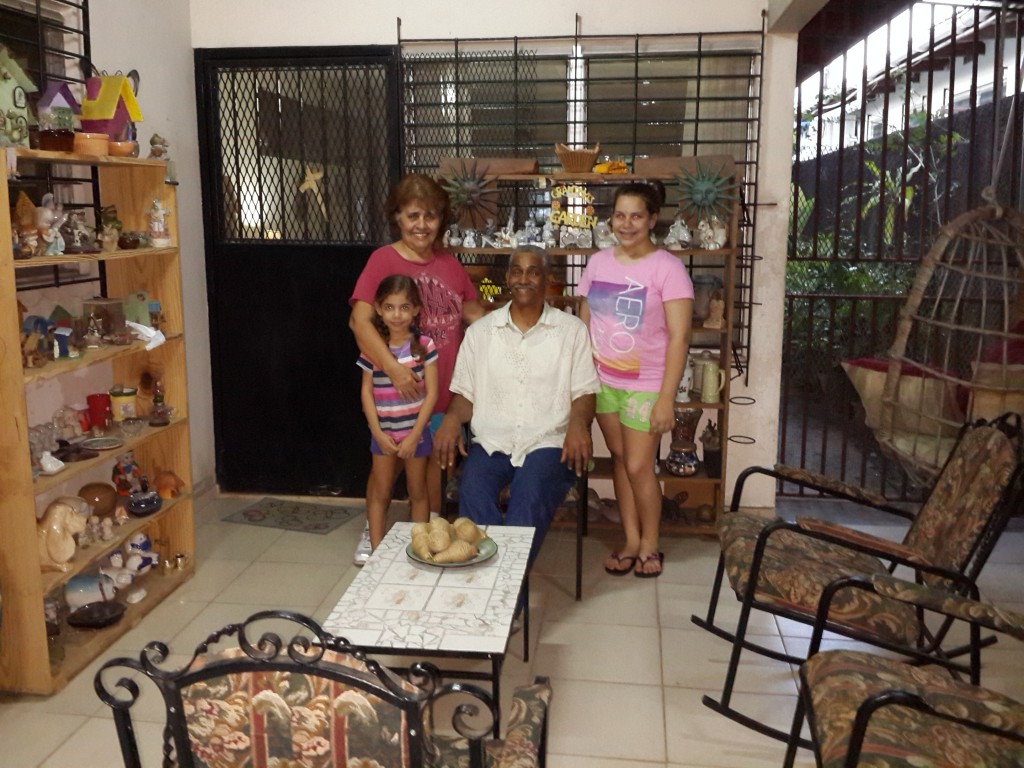 Robert from New York, learning Spanish in Panama City, having a great home stay experience, and feeling like a king in this photo! He was a bit far out but enjoyed his daily walk to the Spanish school. 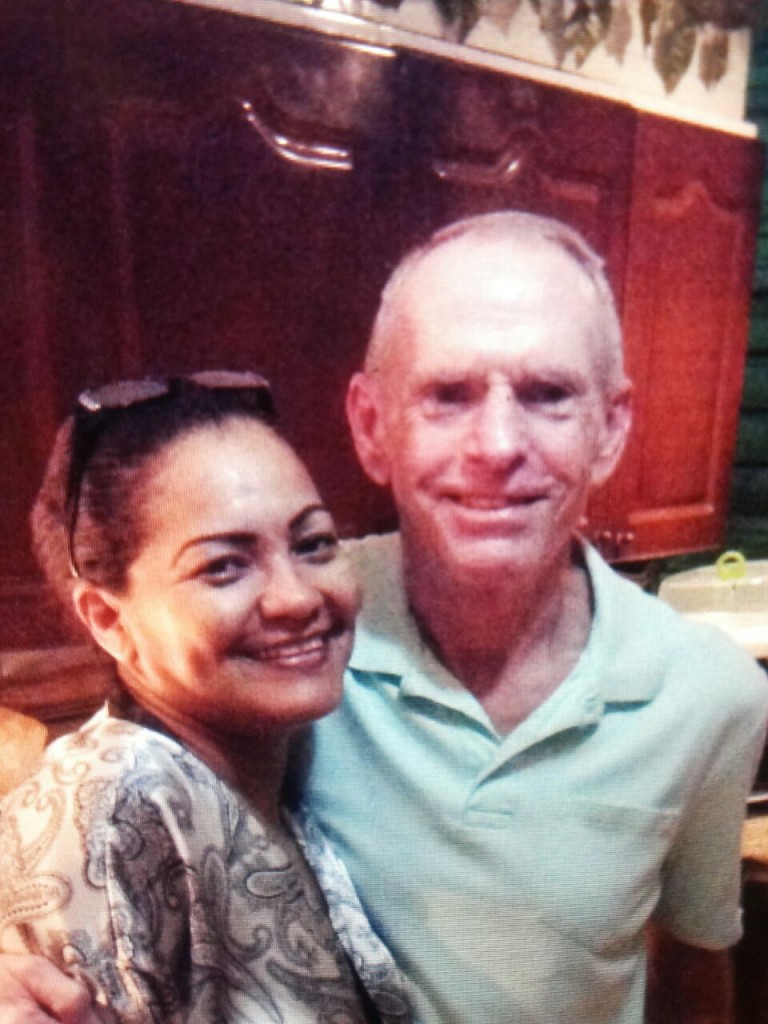 These Panama home stays are in neighborhoods that are especially selected; friendly, safe, and perfect for practicing and learning Spanish and speaking Spanish with local Panamanians.

Spanish Panama Language School accommodations: Our Panama home stays, Panama hotels, hostels, and Panama apart-hotels are in the best and safest neighborhood in Panama City, with all the conveniences nearby as you learn Spanish as spoken in Panama and Latin America.

The friendly neighbors are ready to help you practice your newly acquired Spanish language and vocabulary.

This swimming pool is 2 doors away from Spanish Panama Language School. Ramada Hotel, Via Argentina